Our live online workshops are now open for registration! 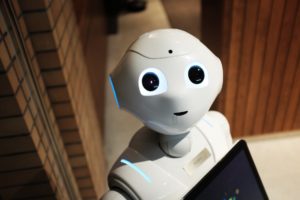 Machine learning (ML) provides the ability for a machine or program to learn and improve itself using data rather than written instructions.

Artificial Intelligence (AI) is an area of computer science that creates intelligent machines that act and work like humans.

Algorithms are step-by-step sets of operations to be performed to help solve a problem.

Neural Network is a computer system, modelled after the human brain.

Level For Everyone
Subjects Science and Technology, Other
Provinces / Territories Across Canada

Created in partnership with:

Ensure there is enough space in the classroom for students to move around.

Watch a run-through and tutorial of our unplugged "Learn Like a Computer" lesson plan:

Arrange students into a circle, about 10 people each.

Choose 1 student to be the picnic organizer. Have this student choose a rule that all objects being brought on the picnic must follow. An example rule could be that the object must be yellow. Make sure no one else in the circle knows what the rule is!

The trainer should return to the circle and start by saying “I am bringing ____ on my picnic.” The blank should be filled by an object that follows the rule they created. Go around the circle, one student at a time. Each student says “Can I bring _____ on your picnic?”. The picnic organizer should respond with “yes” or “no”. The game should continue until all students have discovered the rule. Remind students who have discovered the rule that they shouldn’t reveal it.

Let’s talk a little bit about learning!
Ask: What are some ways you like to learn?
Computers also have a favourite method of learning too: it’s trial and error! Computers love to learn from their mistakes!

Draw a number on a board or piece of paper and show students. Ask: What number is this? Follow up by asking how do you know that? (A: Because you have seen this number a thousand times).

Ask: Who has heard the term machine learning or artificial intelligence?

Ask: What is machine learning? (A: See terminology)

The process of learning based on data and human feedback is called supervised learning.

Ask: How did you make your first guess? (A: It was random!) Machine learning algorithms do the same thing, their initial guesses are completely random. This is because they don’t have enough information to make an educated guess.

Ask: What patterns were you looking for when deciding what to bring on the picnic? (A: Noticing a trend in the items that were allowed on the picnic). It was almost like connecting the dots, after you made enough connections in your head you could figure out the theme. This is exactly how machine learning algorithms such as neural network learns.

Supervised learning is the process of an algorithm learning by seeing many examples (data). The algorithm then looks for patterns in the data to learn about what it is seeing.

In this next game, we are going to experience how machines learn to find the best solutions to problems.

Ask: In what ways are we seeing machines working to find ways to solve today's problems?

Select an object from the classroom and a student who will be the 'machine' that will learn. Ask the student to cover their eyes while the other students hide the object.

Ask: How did the student start the search?

Initially, we can start randomly if we have little idea about where the object is, but after several games, we probably have already some intuition where to search first. Computers learn very similarly; if they are unfamiliar with the environment they will initially just guess. However, if they have seen the same room before, they may have better guesses and find the object much faster! Playing the game many times in different rooms will help computers solve this problem faster and faster. This type of learning is very typical for example with robots that need to navigate and act in real environments.

Ask: How did our ‘machine’ find the object? (by following our hints of getting ‘warmer’ or closer)
Ask: When we told them that they were ‘cold,’ why didn’t they keep looking in that area?

This game is an example of how a machine can learn from feedback based on its actions. This is called reinforcement learning, which is very similar to how we train our pets; we reward them when they perform well so they become better behaved over time. In this game, we gave hints and encouragement as a ‘reward’ until our ‘machine’ found the hidden object.

To learn how Amazon uses artificial intelligence and machine learning to deliver packages to its customers, watch this video (https://youtu.be/B2Humr181Qw)!

Learn about AlphaGo the machine learning algorithm that changed the game of Go: https://www.alphagomovie.com/

Research careers in machine learning to see what opportunities are out there, and the different pathways that could lead to a career in ML. For example, Anjeliki and her path to becoming a Senior Speech Scientist for Alexa: https://www.amazon.jobs/en/pioneers/angeliki-m

AI teaches itself to walk without any human help (video) by Science Museum:
https://www.youtube.com/watch?v=imOt8ST4Ejc